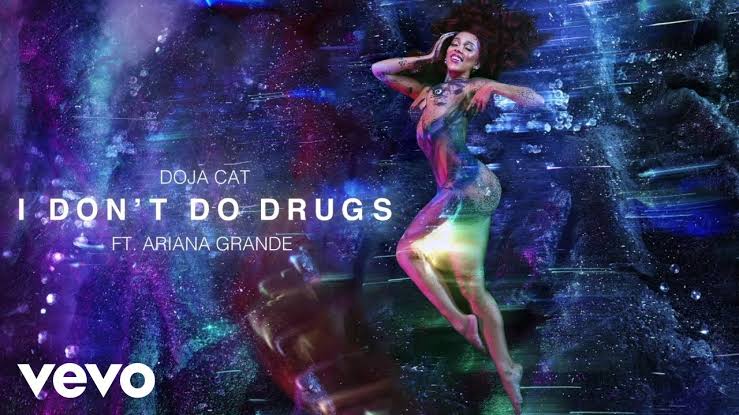 American rapper and singer, Amala Ratna Zandile Dlamini, known professionally as Doja Cat release a new single “I Don’t Do Drugs” following up on the success of ‘Kiss Me More‘ with her brand new album Planet Her, at the end of the month.

“I Don’t Do Drugs” is the third collaboration with singer Ariana Grande and is the sixth track of Doja Cat’s third studio album, Planet Her. In January, Doja hinted at a collaboration between the two in a tweet where she drew attention to the list of artists she follows, which included Ariana.

“Planet Her” is the third studio album by Doja Cat, which will be released on June 25, 2021. She first teased the album back in mid-2020 during her VMA interview saying the album has different sounds but that it is similar to 2019’s Hot Pink.

The front and back covers are both shot by the legendary David LaChepelle and have a great aesthetic to them. She also reveals the full track list which is 14 tracks long with some big features. Along with SZA, the guests are J.I.D., The Weeknd, Ariana Grande and Ariana Grande

That’s an exciting guest list for the LP. The official cover art for Planet Her was revealed by Doja Cat in an Instagram post made on June 9, 2021. In this photograph by famed American photographer David LaChapelle, Doja is seen laying across a galaxy with text of her name and the album’s title overlayed vertically. Doja Cat was born and raised in Los Angeles, she began making and releasing music on SoundCloud as a teenager.